THERE ARE NO REFUNDS ON SHIPPING CHARGES FOR MISSED DELIVERY DATES. 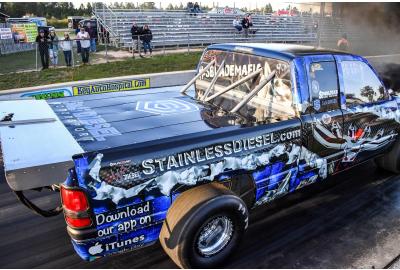 While not as prominent as traditional drag racing, diesel drag racing is definitely a thing. And for the competitors that live and breathe it, it’s a very serious thing. For the past few years, Johnny Gilbert and his team at Stainless Diesel have been campaigning a second-gen Dodge Ram at the top of the Pro Street diesel class—and their 2,500-plus horsepower, Cummins-propelled beast just set a new eighth-mile record. After stringing together a host of low 5-second passes (in the 1/8th mile) in the 150-mph range, Johnny drove the truck to a 4.92 at 155.7-mph, effectively obliterating the old trap speed record in the process.

10 years ago Pro Street diesel trucks were barely knocking on the door of high 5’s in the eighth-mile and trap speeds rarely exceeded 120 mph. So what’s changed? For starters, horsepower has more than doubled, power management is much more precise, transmission options have improved and common-rail injection technology has come to dominate

It’s been a long time coming for Johnny Gilbert and the Stainless Diesel crew. After knocking on the door of 150-mph for a while (and flirting with 4-second territory for an even longer period), Johnny finally broke through on the trap speed front in early July. And just two weeks after obtaining that new personal best trap speed of 150.26 mph, he and his team took advantage of cooler track conditions and threw a more aggressive tune-up at the common-rail Cummins. The truck responded by dead-hooking, grabbing a 1.25-second 60-foot and sending its 4,500-pound heft through the ‘660 in 4.92 seconds at a record 155.7 mph.

Although more than 2,300 hp made it to the slicks on the 155.7-mph pass (according to the calculators available at WallaceRacing.com), there is definitely more to setting records than simply making gobs of horsepower. You have to maintain traction, apply your power with precision and keep the engine from exploding in the process. Putting together a record-setting pass is always the result of a full team effort. Thanks to the use of a stand-alone Bosch Motorsport ECM, things like ground speed, shock travel, EGT and dozens of other key parameters are logged each time the truck makes a pass. The guys under the Stainless canopy even measure G-force and yaw, too (and we’ll note that hard launches can yield as much as 2.2 G’s).

Under the fiberglass front clip, you’ll find a sleeved and deck-plated 6.7L-based Cummins built by Pine Hill Auto LLC in Carrollton, Ohio. D&J Precision Machine rods and Diamond pistons are part of the rotating assembly, a Wagler Competition Products head sits up top and S&S Diesel Motorsport provides plenty of fuel thanks to stroker CP3’s and agriculture-based 6.7L injectors. The single turbo is the biggest news for 2020, with Johnny and team scrapping the triple-turbo arrangement the truck sported for years in favor of a sizeable, 88mm Garrett GT55 with a 4-inch turbine wheel. By switching to the single, 100 pounds was shaved off of the truck’s bottom line and the power that was sacrificed is made back up with the use of nitrous (6 to 8 pounds worth per pass).

As diesel drag racing continues to evolve and further establish itself as a true, semi-professional entity, you’ll find a lot more than simply a driver and one of his or her friends in the pits. Thanks to a rock-solid mix of family and friends, the team behind Stainless Diesel’s record-setting trap speed.