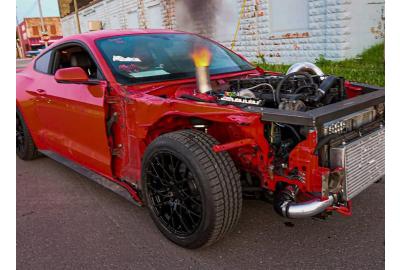 A lot of muscle car critics say Mustangs are nothing more than big-tired coupes with truck motors. That hasn't been true of the new pony cars in quite some time, but even if it were, truck motors aren't always a bad thing. At least, that's the reasoning behind Westen Champlin's "Smokestang" project.

As he's detailed on his YouTube channel, Champlin bought a crashed 2016 Ford Mustang Ecoboost and decided to give it a heart transplant. Rather than going for a GT500 or LS swap, he opted to drop in a 12-valve Cummins diesel. The 12-valve is an iconic engine, originally used in farm equipment before its debut in the original 1989 heavy duty Ram.

After hours and hours of labor and countless dollars spent, Chaplin has a 12-valve Cummins-powered Ford Mustang coined “Smoke Stang”. In this latest video, he has gotten it back from the paint shop that handled the new front sheetmetal and it is ready to burn up the Kansas asphalt.

If you ignored the hood stack hanging out of the hood, it simply looks like a GT500 thanks to the upgraded frontend. Then, once the engine is fired, its pretty clear that this is not a 5.0 Coyote engine. Instead, its a coal burning 12-valve chugging and puffing. Maybe Ford should take note and offer a Powerstroke GT option soon?

Chaplin has had to upgrade the entire front suspension with air-ride so the front of the car can support the weight of this engine. After all, he’s at least 1,000-pounds heavier on the nose just from the engine swap. Check him out at his Facebook page as well: https://www.facebook.com/watch/westengw/